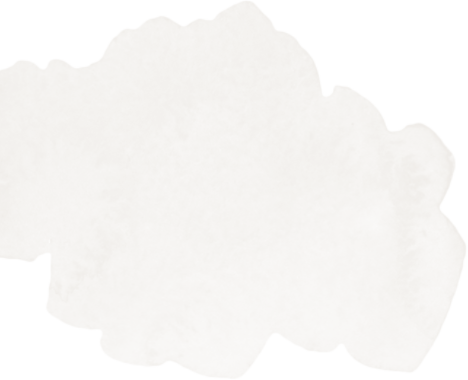 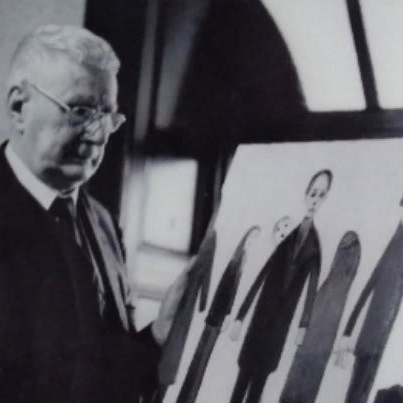 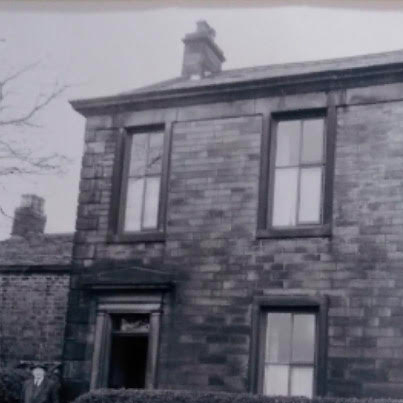 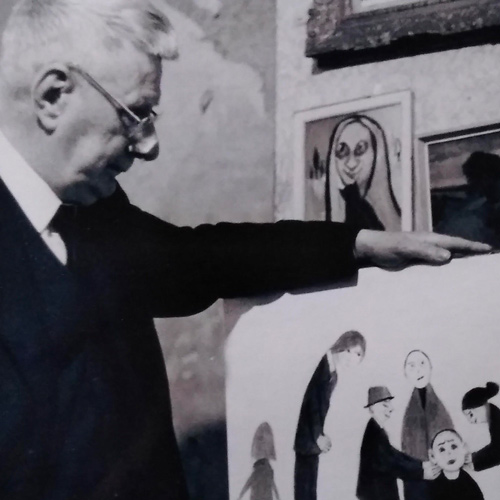 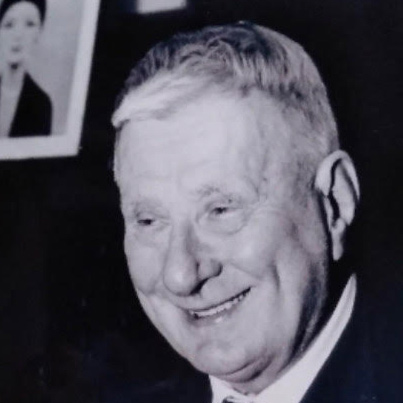 The History of L.S. Lowry

Laurence Stephen Lowry was born, 1st November 1887 and lived in Stretford. His mother Elizabeth was a talented pianist and his father Robert worked in an Estate Agent’s office. In 1909, the family moved to Pendlebury, an industrial area. The first job Lowry had once leaving school was as a clerk for a Chartered Accountants firm in Manchester, however in 1910 he became a rent collector for the Pall Mall Property Company and remained there until he retired in 1952.

As a child Lowry enjoyed drawing. He paid for private painting lessons with two artists – Reginald Barber and William Fitz, and also attended evening classes, where his tutor Adolphe Valette, inspired him with his knowledge of impressionist artists.

Lowry attended Salford School of Art in 1915, for evening classes, where one of his tutors (Bernard Taylor – an art critic), told Lowry that his paintings were too dark. Lowry tried painting on a white background and continued to do so for the rest of his career. Lowry worked with five colours, ivory black, flake white, yellow ochre, Prussian blue and vermillion – the same colours we have tried to incorporate into this website! 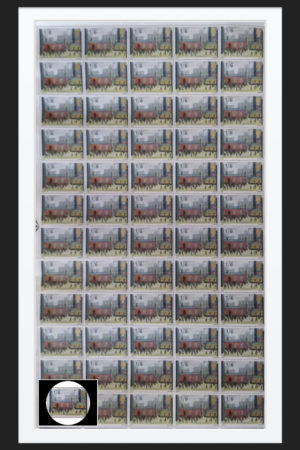 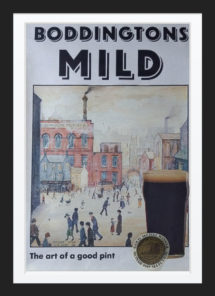 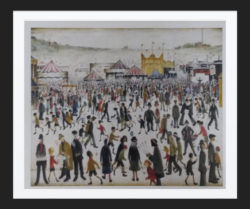 Some of his artwork...

Peel Park features regularly in Lowry’s artwork, as well as the views across it. They could be seen from the Technical College windows and Lowry began painting what he saw in front of him rather than the conventional landscapes of the countryside nearby. When asked why he decided to paint the industrial scene, Lowry explained that he missed a train at Pendlebury Station, where he looked to see the Acme Spinning Company’s mill turning out, and said ‘I watched this scene, which I’d looked at many times without seeing, with rapture.’

Lowry continued to paint in the theme of the industrial scene throughout the 1920s and seemed to produce more artwork in this decade than in any other. Although Lowry didn’t sell any of his work, he did exhibit his artwork in many areas including the New English Art Club.

Lowry had his first public exhibition in 1921, in Thomasson’s offices in Manchester, alongside two other artists. A review by Bernard Taylor, for the Manchester Guardian, described Lowry as someone who ‘may make a real contribution to art’ and someone who has ‘a very interesting and individual outlook’

Lowry also continued his life drawing evening classes into the 1920’s, he believed the figures featured so often in his artwork would not have developed in the way that they did without the training and classes. 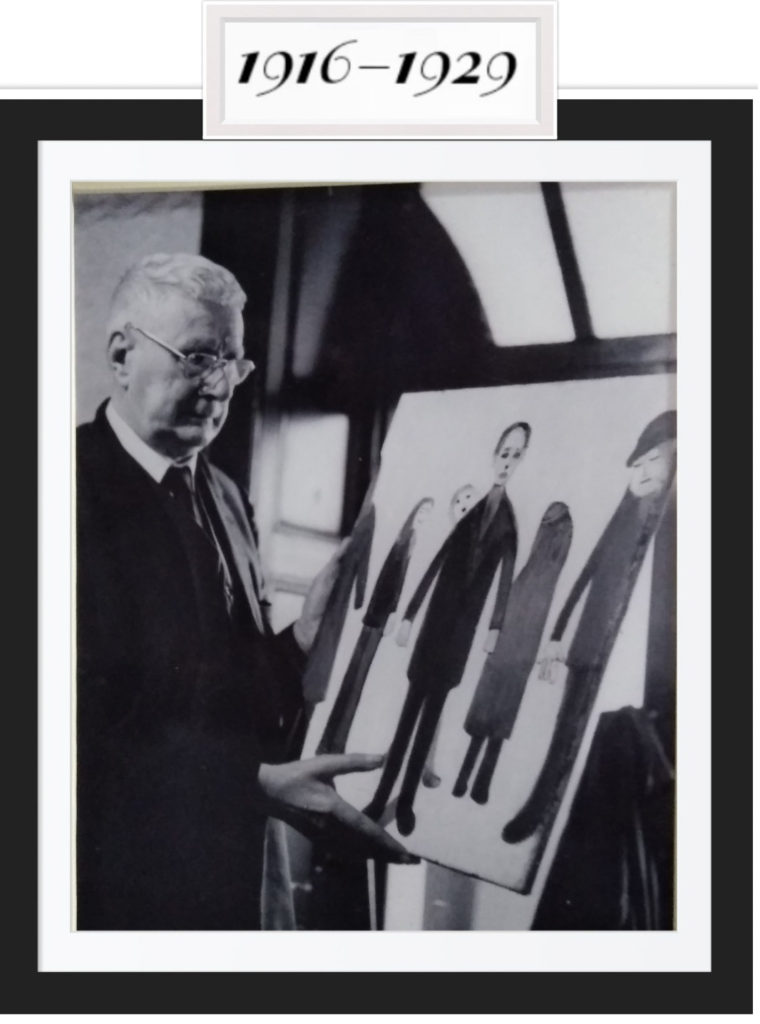 By 1930 – ‘Coming from the Mill’ which is now in the Lowry Collection was produced and Lowry’s first one-man exhibition of drawings was held at the Round House, Manchester. All the artwork at the exhibit were drawings of the Ancoats area – every single piece of artwork sold. Manchester Art Gallery bought one of these.

In 1932 Lowry’s father died suddenly, leaving debts that Lowry himself repaid over time. In the same year Lowry had work accepted at the Royal Academy in London.

His mother, Elizabeth, had previously suffered with poor health, and took to her bed permanently.

Lowry produced fewer artwork during the 1930s as he was also looking after his mother and took to painting late into the evenings.

In 1938 he painted Head of a Man which although started as a self-portrait, ended up as a grotesque head.

He later stated that ‘all the paintings of that period were done under stress and tension and they were all based on myself.’ 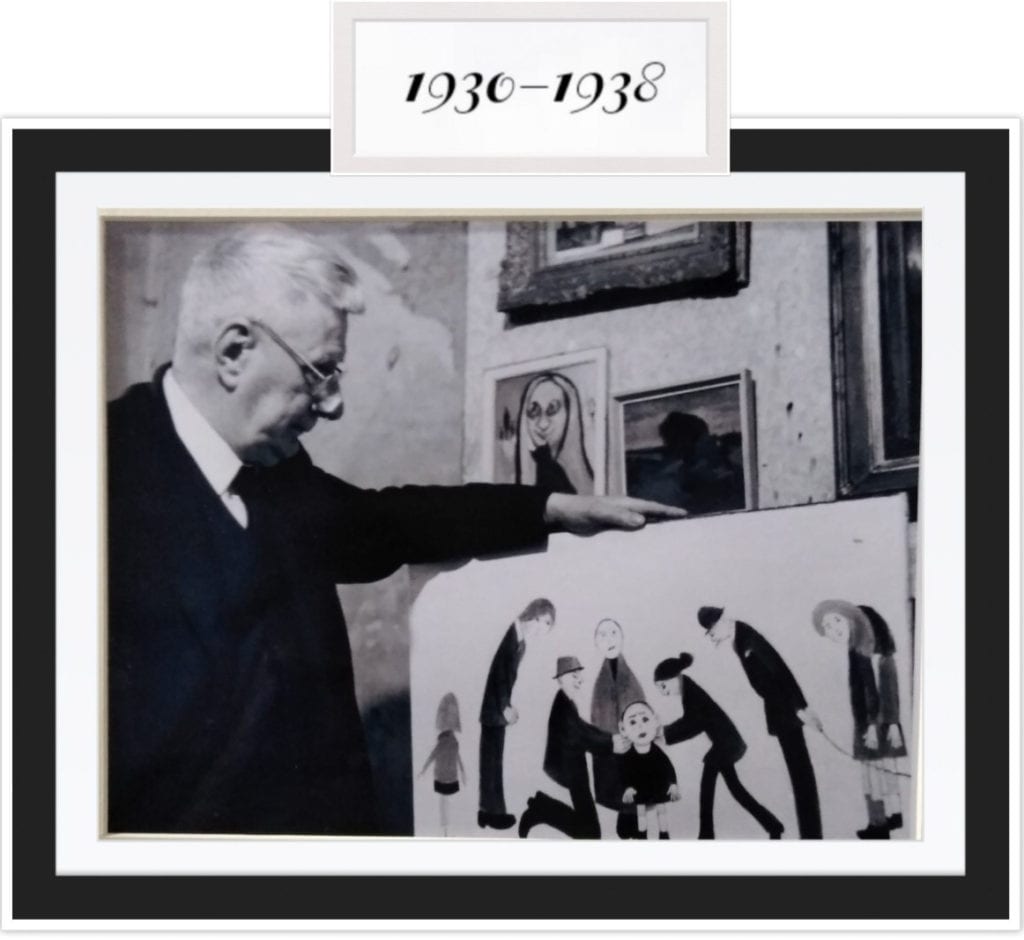 In 1939, Lowry had his first solo exhibition at the Lefevre gallery in London and the exhibition was successful with many of his artwork being sold. Sadly in October the same year, his mother Elizabeth died leaving the artist devastated. Lowry described that his life altered completely after her death.

Lefevre gallery cancelled his next exhibition due to the Second World War and he didn’t show his work there again until 1943.

He began to tire of industrial scenes and started painting and drawing other subjects, increasing his focus on small groups of figures or individuals which were painted on a plain white background.

He stated that they were all based on real people and characters some of which he saw living on the streets, one of which inspired ‘A Beggar’

It was difficult for people who were so used to his industrial scenes to get used to, however he never completely abandoned this area of painting.

During the 1940s, Lowry travelled throughout Britain, so as to spend as little time as possible at the home which was filled with memories of his late mother.

A trip to Wales with his friend, Monty Bloom, reignited his interest in industrial landscapes when they visited some of the mining villages in the Welsh valleys. This resulted in major works such as ‘Bargoed 1965’ and ‘Hillside in Wales 1962’.

In 1952,The Museum of Modern Art, New York, acquired one of Lowry’s works and in 1953 Lowry was appointed an official artist at the Coronation of Queen Elizabeth II.

In 1958, a permanent display of Lowry’s work – The Lowry Gallery, was set up at Salford Art Gallery. 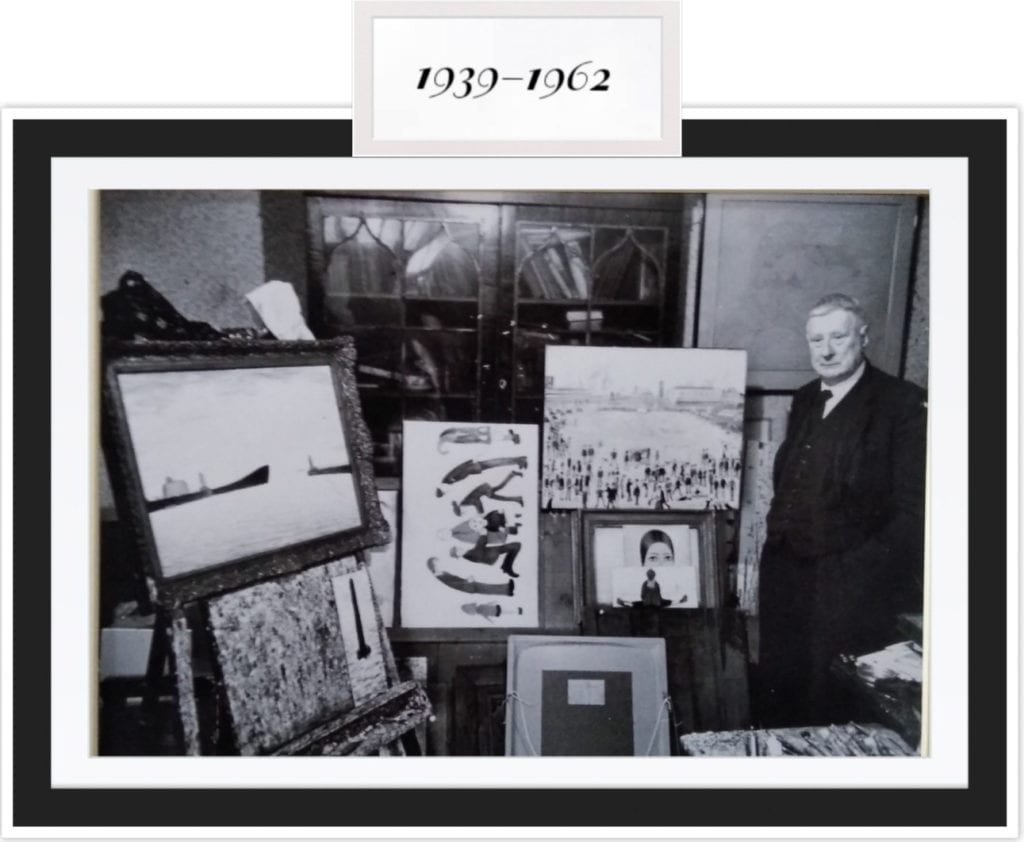 Lowry had also painted empty landscapes and seascapes over the years and in the 1960’s visited North East England (particularly Sunderland) repeatedly. He painted many of his seascapes from his window view at the Seaburn Hotel which he visited regularly.

In 1964, to mark the artist’s 77th birthday, A Tribute to L.S. Lowry opened at the Monks Hall Museum, Eccles.

In 1967, The General Post Office issued a stamp featuring one of Lowry’s industrial scenes – you can see a picture of these stamps on our website!

In 1968 Lowry rejected a knighthood proposed by the Prime Minister on the New Year’s Honours list, he rejected five offers of honours in his lifetime.

Lowry continued to draw into old age and his characters sometimes looked cartoon like. Some private ‘mannequin’ drawings depicting young women, partly clothed in restrictive bodices or wearing versions of male evening dress, were discovered after his death.

Sadly on 23rd February 1976, L.S Lowry died of pneumonia at Woods Hospital in Glossop following a stroke at home.

Lowry died just seven months before the opening of a major retrospective of his work at the Royal Academy, London and by the time that exhibition closed it had achieved one of the highest record numbers of visitors, for an exhibition by a British artist. 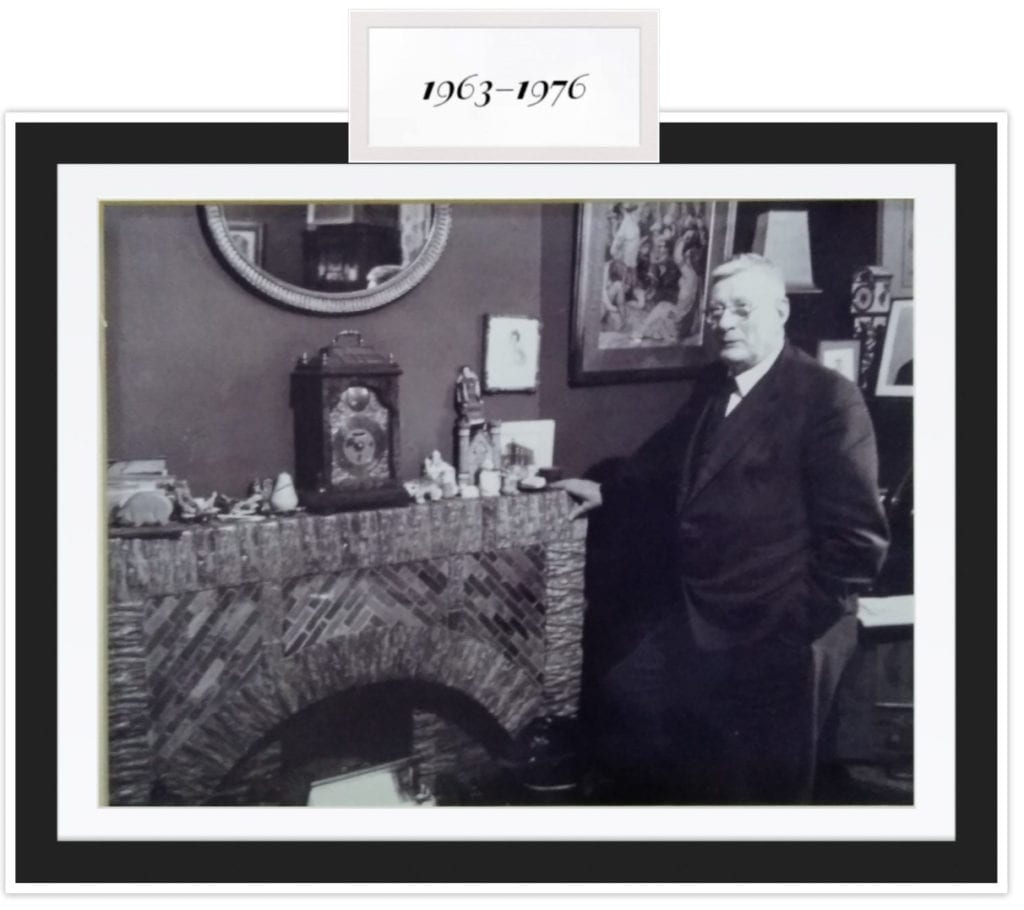